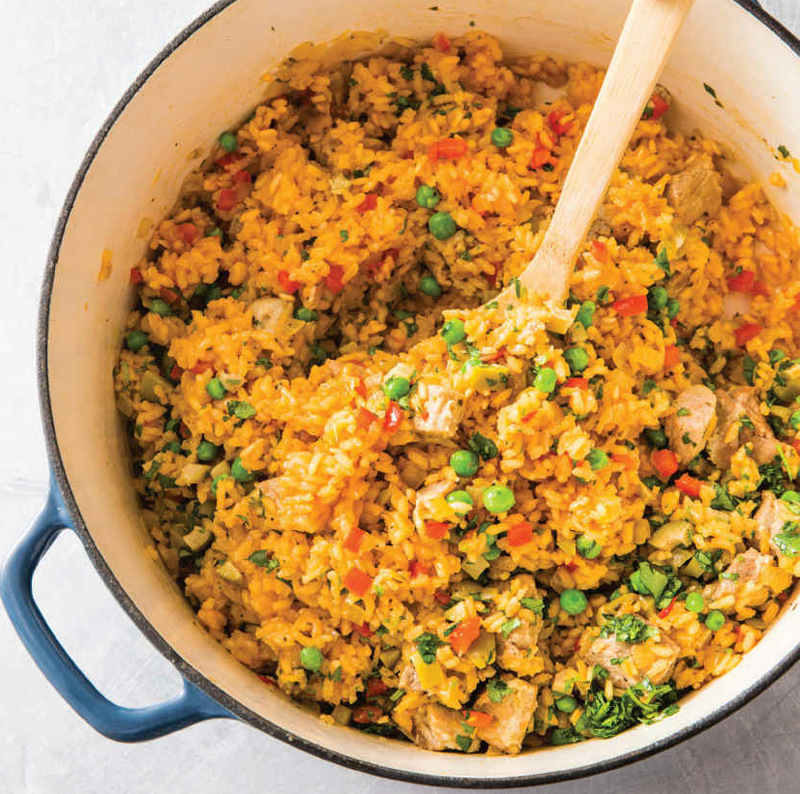 Arroz con puerco, a one-pot dish often made in Cuba and Puerto Rico, is a cousin of arroz con pollo but gets its uniquely alluring and ultrasavory profile from pork. We chose pork butt for its deep flavor and good marbling; cutting it into chunks and braising it in water with a quartered onion, smashed garlic cloves, and bay leaves tenderized this tough cut while simultaneously yielding a rich pork broth in which to cook the rice. We then set the pork and broth aside so we could sauté our sofrito of red bell pepper, onion, garlic, cumin and dried oregano. We added medium-grain rice (which turns creamy once cooked), sazón (a Latin seasoning blend), and the pork and broth.

Letting the pot sit for 20 minutes after cooking allowed the flavors to meld and the rice to absorb any extra moisture. Chopped green olives, peas, cilantro, and a little red wine vinegar stirred in at the end brightened up this satisfying dish. Goya Sazón with Coriander and Annatto (or con Culantro y Achiote) can be found in the international aisle of most supermarkets; 1 packet equals about 1½ teaspoons. If you can’t find it, you can make your own with ½ teaspoon garlic powder, ¼ teaspoon salt, ¼ teaspoon paprika, ¼ teaspoon ground coriander, and ⅛ teaspoon ground cumin. Let the rice rest for the full 20 minutes before lifting the lid to check it. Long-grain rice may be used, but it will be slightly less creamy. Pork butt roast is often labeled Boston butt in the supermarket.